How did you spend *your* fourth of July holiday? Probably not like the frontrunner for the Virginia GOP’s 2021 gubernatorial nomination, Amanda Chase, who was hanging out in Richmond yesterday with her buddies – including “right-wing extremist groups,” “a gun club” and “white supremacists.” Chase was also busy opining that Confederate monuments  – despite all historical evidence to the contrary – are NOT “symbols of hate.” By the way, since the media didn’t report this key information, for whatever reason(s), Chase’s rally yesterday was – as she herself posted on Facebook – “in honor of Duncan Lemp.” Who was Duncan Lemp, you ask? Here’s the Wikipedia entry on his fatal shooting by police:

On March 12, 2020, Duncan Socrates Lemp was fatally shot at his home in Potomac, Maryland, during a no-knock police raid by the Montgomery County Police Department’s SWAT team. Lemp was a student and a software developer who associated himself with the 3 Percenters, a far-right paramilitary militia group

Lemp associated himself with the 3 Percenters, a far-right paramilitary militia group, and set up websites for other such organizations. He also “frequented the 4chan and Reddit message boards, sites popular with internet trolls”. He was a member of the United States Transhumanist Party, having joined on September 6, 2019. A week before the raid, Lemp posted a picture of two people armed with rifles on Instagram, with text referring to “boogaloo”, a term used by the boogaloo movement as coded language for an anticipated “war against the government or liberals.”

That’s a pretty important piece of information you’d think the media would have reported, by the way, but…nope, that might take a minute or two of using Google or whatever. And god forbid they actually give their readers the full context of what’s going on. Ugh.

Anyway, so what was the reaction from the Virginia GOP to State Senator Chase’s rally with “white supremacists” in honor of a former member of “a far-right paramilitary militia group?” So far, as Del. Jay Jones (D) pointed out a few minutes ago – “the silence is deafening here.” And it’s not like Virginia Republicans weren’t tweeting yesterday; see the Virginia GOP Twitter feed, which has tweets on their U.S. Senate candidate, handing out Trump yard signs, etc. But anything on Chase and her “white supremacists” rally in Richmond yesterday. Nope, nada. There’s also nothing from the VA Senate GOP Twitter feed either on Chase’s Fourth of July festivities. Cat got the Virginia GOP’s tongue? Do these folks actually *approve* of Chase’s behavior, are they just terrified of her, or both? Or, ultimately, do they realize that if they condemn Chase, they’d have to also condemn Trump and others in their own party, and that’s something they can’t bring themselves to do? 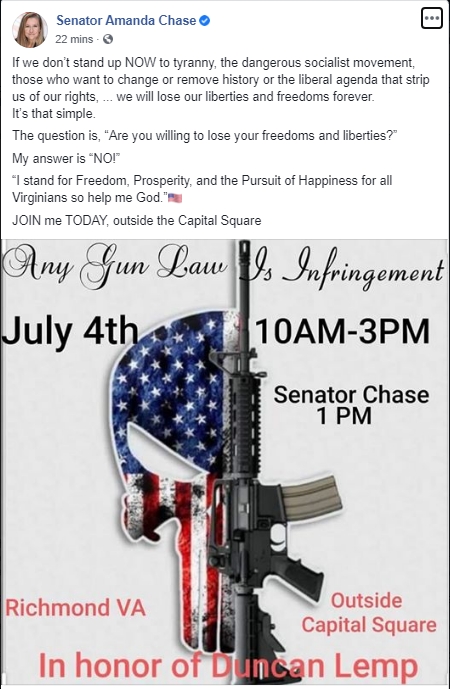 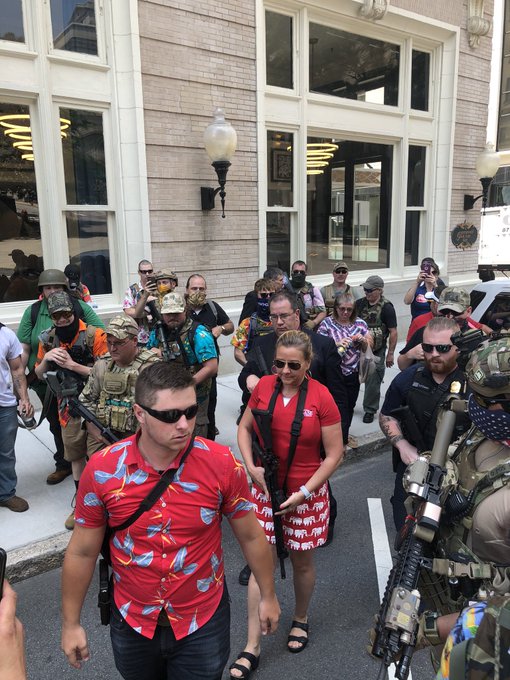